skip to main | skip to sidebar

Another weekend, another race, another PB!

So today was my first race since my operation, and to be honest I was a bit concerned, as I'd struggled with the distance last year, and I've not been able to do any training since the Dartmoor Dash 3 weeks ago. 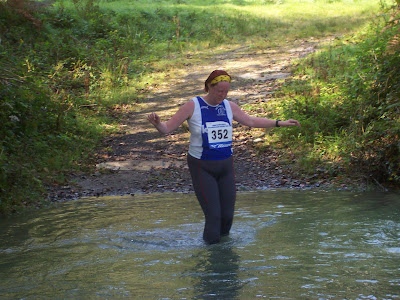 Nice T shirt in the goody bag, and instead of a medal we got a trophy. One of those laser engraved acrylic ones. Very smart. I hope stories of the race's demise are greatly exaggerated!
Posted by Yvonne Morgan at 20:06 No comments: 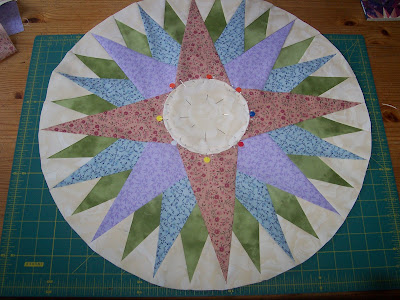 Looking good this morning. It didn't take so very long to piece, I followed Carol Doak's instructions for paper piecing, and found them great! I've done PP before, (of course, see my Dear Jane quilt!) but I'd always had trouble cutting pieces big enough so they covered the patch once they were flipped over, and also reversing angles kind of got me confused...reminds me of the time I was steering a submarine and got totally lost between left and right as the boat went in the opposite direction to the way I steered...anyway I digress.

Carol recommends measuring your patches first, then adding a nice big seam allowance and cutting each piece as a rectangle. You then pin your first patch in place on the reverse of your pattern (I found flower head pins helpful here) Next you fold the pattern back on itself along the first seam line (use a postcard as a guide) and cut the fabric using either the 1/4" line on your rotary ruler, or the add-a-quarter ruler. Next you line up your second patch with the newly trimmed first patch, flip it to make sure it covers all the pattern it's supposed to and sew it down.

My only trouble came when I realised I'd not got the pattern pieces marked out as well as I could have done with EQ6, I'd ended up having to sub-cut them into smaller pieces. Good to note with a small piece and not with the full quilt! It still came together reasonably well.

I need to applique the central circle in place then applique the whole thing onto a cream backing square and it's done. Maybe tomorrow?
Posted by Yvonne Morgan at 09:30 No comments:

I've been off since last Tuesday following the operation, slowly getting better and more energetic, anyway on Friday I woke up with a really itchy leg, right where I'd been bitten. It was swollen, hot and so itchy it was unbelieveable. Eventually we ended up at the out of hours doctor's facility, and I got myself a new course of anti-biotics, double strength, some anti-histamine tabs and some hydrocortisone cream. Lucky me then also got one of the commonest side effects of anti-biotics! So now I'm off sick for the rest of the week, with instructions to finish the course.

Even better, he warned me that the discolouration may take up to 2 months to clear. Just as well it's winter and I'm in trousers.

So, while I've been off, I've been working on the Christmas gifts for my quilt group. Currently up to 24 in all, so about another dozen or so to go. Needlecases, pinwheels, pin cushions, could do with a couple of new ideas for some new gifts but I'm happy with how they're turning out: 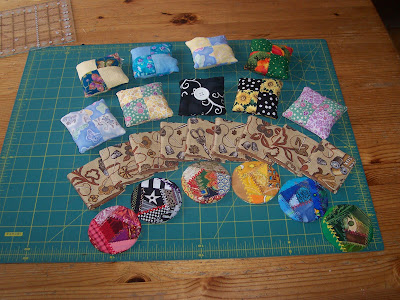 I'm also carrying on trying new ideas for that mariner's compass star. I've re-drawn the borders to emphasise the spikey-ness of the compasses, and today got as far as printing off the foundation for the central star. I'm not making it up as the full quilt this time, but it'll make a great cushion while I practice the technique. I thought I'd go traditional and stick with red, white and blue. All I need to do is cut the foundations and sew the thing together! 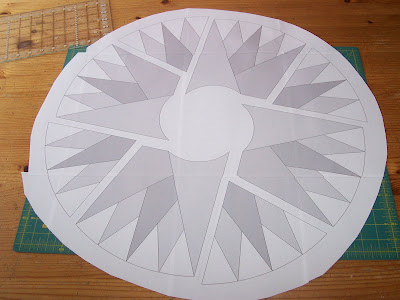 This was also my first attempt at trying one of EQ6's new features, being able to choose my own sections for foundation piecing. (Actually I'm not sure if this is new, but it's the first time I've used it!!) Tomorrow I'll pull fabric from the stash to try piecing the star.

I also finished my Christmas table mat yesterday after only being able to sew in half hour bursts for most of the week. All appliqued, quilted and bound, and ready for the Christmas meeting: 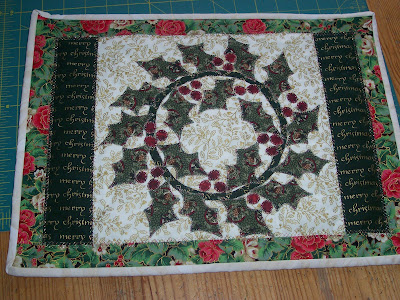 Posted by Yvonne Morgan at 13:56 No comments:

I had my throat op yesterday, and can't believe how shattered I feel! I was up at 6am to get to hospital by 7.30. Final check by consultant, then up to pre op ward. Lots more versions of the same questions I'd been asked before, then walk down to theatre. Just after the gasman had put the venflon in, the fire alarm went off :-O so up to recovery section for nearly an hour until it was silenced. Fortunatley it was a false alarm.

Next thing I was up on one of the recovery wards, but first I was wheeled to the wrong one! Eventually I went to the right one and spent most of the afternoon asleep. I was allowed home at 5pm.

Today I woke up with a galloping sore throat and my legs felt like I'd run a marathon. Still drowsy but determind not to lounge around all day doing nothing, I started working on the extra quilting on my siggy quilt. I'd seen it at the show, and thought it needed more emphasis around the signed block, so I'm going over the diamonds. I'd done 3 rows before this morning and started merrily on the 4th, only to discover that recovering from a general anaesthetic and sewing in a straight line don't mix! Luckily no pictures of the wobbles!

Instead of working more on that, I decided to do some of the pin wheels I'm working on for the quilt group: 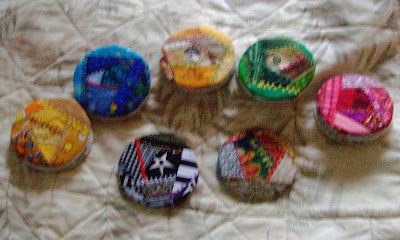 They're not as out of focus in real life! I've only finished the bottom two, but should get the rest done tomorrow.

At the last group meeting, the programme was down as "Plym Challenge", but there was no other information. It turned out to be a challenge to produce a table mat for our Christmas meeting, using two provided fabrics. There were no other conditions, but Kathleen showed us some mats she'd made for inspiration. I decided the way to go was to make a block on EQ into a mat shape: 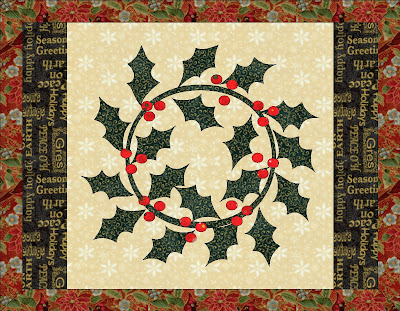 Then to see how well it came out in real life: 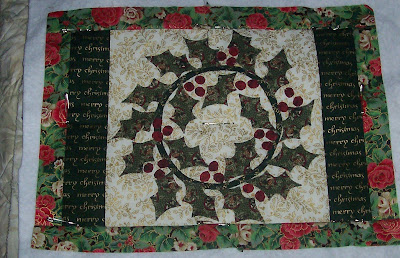 Just noticed the leaves are going in opposite directions, but I don't suppose that'll matter! Kathleen said we weren't allowed to eat unless we brought our mat! I'm off to Derry's on Saturday to buy some glittery thread, I used most of the Christmassy bobbin I had on making the pinwheels :-/
Posted by Yvonne Morgan at 19:01 No comments:

I've decided I'm going to have a go at that quilt. Started by printing off a batch of templates from my quilt program, which has led me to simplifying the block by deleting some line I didn't need due to the way I coloured the block, then re-printing the block. Tomorrow once I'm back from the race, I'll get my scrap box out and try piecing it.

The letter from the hospital arrived with a huge questionnaire, so that's all filled in ready for the pre op appointment on Wednesday and the op itself next Tuesday.
Posted by Yvonne Morgan at 13:15 No comments: 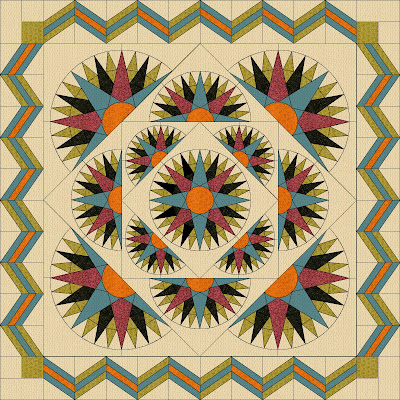 make this?
Posted by Yvonne Morgan at 09:38 No comments:

Lots to catch up on

First of all, I played some more with the fabric dye kit. First time round I used up some of the pre-prepared solutions I'd made up for the small samples. Sadly, I discovered the dye doesn't remain stable for long, I've since been told it can go off in 4 hours if it's hot! So all the fat quarters I dyed came out of the washing machine looking very faded and sorry for themselves. Not to worry, I made up some more dye and repeated the experiment: 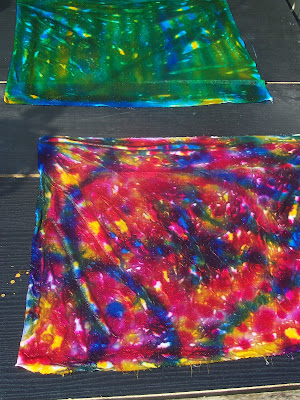 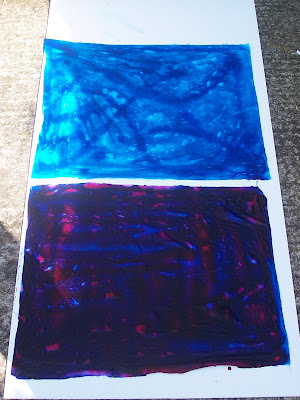 Just need todecide what to do with them.

The online bag challenge issued another pattern for September: 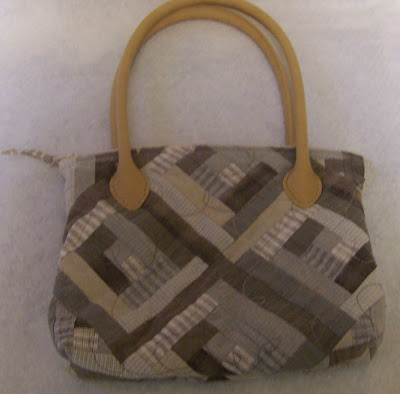 I'm really please with how this one turned out. Even the zip went in OK, although I cheated by accident, and bought an open ended zipper. I've used up the Japanese taupe strips I bought in Birmingham. I'm in the middle of making a slightly larger version as well, using the left over batiks from H's quilt. She's baggsed it, but has asked me to make it up as a cushion. I'm also planning a version in black and white using the leftover strips from B's quilt. I'm even going to use the orange contrast as the centre squares.

The Christmas quilt is coming along slowly, but piecing the curved blocks is a drag. I'm almost finished with making the curved strips, then with a bit of luck, the straight seams will go quickly, otherwise it won't be finished until next Christmas! Another potential saga like the tree skirt!

I've been given the date for my operation at last. 16th September. It was going to be next Tuesday, but typically it's DH's fist day in his new job, so I had to postpone it by a week. I have to go to the hospital one day next week for all the pre op checks, but as the consultant said that won't be a problem for a runner! My first question was when I'd be able to get back to running, but work for some reason wanted to know how long I'd be off work. As it's a Tuesday, I'll probably stay off until the following Monday.

The op date fits in well with races, as it's 2 days after a 8 mile one, and then I don't have another until nearly a fortnight later. strangely enough these two and another one I've got on Sunday are all trail races, so an excuse for shoe shopping! Managed to ask for club discount too, and got a pair for £45. I need to ask at work if I can beg a lift to an October race with one of the guys as it's difficult to get to by public transport. DH is working so me and the kids should be OK with M in his car. I can only ask anyway.

Off to marshall on Saturday for a club 5K. Rain forecast, and advised to bring bikes to get to the marshalling points.

I've been struggling with a toe injury since Torbay, so I'm off to see a podiatrist tonight straight after work. He asked me to bring my running shoes, but as I'm in trousers for work, I'll pack my leggings and top as well. Hopefully he'll be able to sort me out. I think it's due to my flat feet, and according to Google, I could be in line for another operation to sort it out...maybe I could ask if they can do it the same time as my neck?
Posted by Yvonne Morgan at 08:29 No comments:

Yvonne Morgan
I've been quilting for around 10 years. I'm gradually becoming more confident in my abilities and had some of my work in my quilt group's summer exhibition. I'm fighting a losing battle to only buy fabric for specific projects and to finish some of my UFOs I want to get under 2:20 for a half marathon, sub 60 10K and run my first marathon. I've also recently been diagnosed with thyroid cancer.